What is a Queuing System? A flow of customers from a finite / infinite population towards your service facility forms a queue on account of lack of capability to serve them all at the same time. To manage this, you must have a queue system that consists of customers arriving for service, waiting for service if it is not immediate, and leaving the system after being served. 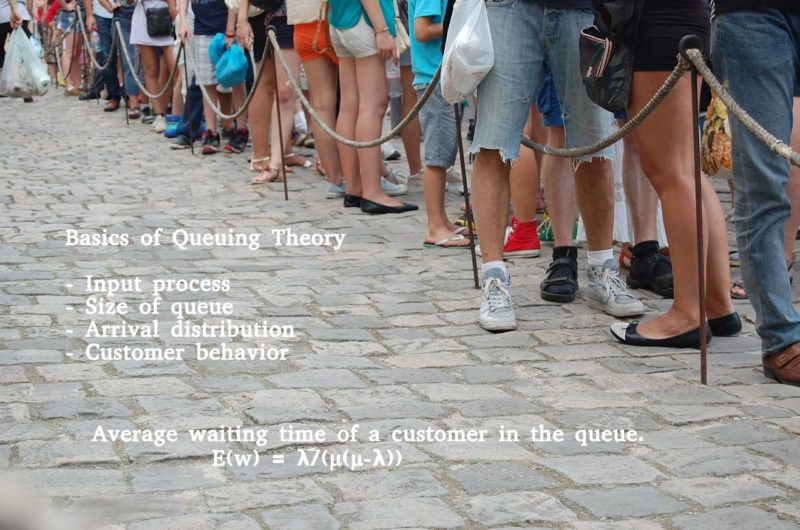 In order to provide better customer service, you need to make your queues move faster. But first you need to know the current metrics of your queue system, including the average waiting time of a customer in a queue, and the total time the customer has to spend in the system.

Input process – The pattern in which customers arrive in the system.

Size of the queue – The size of the input service is either finite or infinite.

FIFO – First in first out

LIFO – Last in First out

Single queue and one server

Several queues and one server

Capacity of the queuing system

Expected number of customers in the system E(n) or L

Expected number of customers in the Queue E(m) or Lq

Probability distributions in the queuing system

The models in which only arrival are counted is a pure birth models. In queuing theory is a birth-death processes because the additional customers increases the arrivals in the system and decreases by departure of serviced customers from the system

Let Pn(t) be the probability of n arrivals in a time interval of length t, n ≥ 0 is an integer.

Here the random variable is defined as the number of arrivals to a system in time has the Poisson distribution with mean λt or mean arrival rate λ.

The queuing system starts with N customers at time t= 0 where N ≥ 0. Departures occurs at the rate of µ customers per unit time. Let Pn(t) be the probability that n customers remaining after t time units.

b: distribution of inter service time

c: the number of servers in the system

d: capacity of the system

In this model queuing system has single server channel, Poisson input, exponential service, and there is no limit on the system capacity and customers are served on a first in first out basis.

Characteristics of the model:

Probability of queue size being greater than the number of customers is given by ρn, where ρ =λ/µ.

Average number of customers in the system

Average queue length is given by

Average length of the nonempty queue

Average waiting time of a customer in the queue.

Let the random variable v denote the total time that a customer has to spend in the system including the service.

This explanation of queuing theory and the associated math and formulas for calculating the average wait time within queue systems has been published with input from Prof. Dr. Rajalakshmi Padmanabhan , Head of Statistics, Bangalore University.