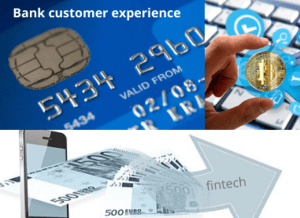 On Nov 6, 2016, India’s entire banking system came to grinding halt when the Government of India announced the demonetization of Rs. 500 and Rs. 1,000 currency notes, and the issue of new Rs. 500 and Rs. 2,000 notes. The result was unprecedented crowds and long waiting lines at bank branches and ATMs, plus a 200% increase in downloads of the Paytm digital payments app, and launch of BHIM (Bharat Interface for Money) payment app based on UPI (Unified Payments Interface).

Since then, there have been rapid fintech advancements such as cryptocurrency, blockchain banking and AI chatbots that have the potential to transform the banking sector.

Makes you wonder what’s next in the bank customer experience in terms of process simplications and apps. Banks that were offering manual branch services have digitized, and those that have already gone digital are reinventing branches to get people back in them. Now they have to deal with fully digital Neobanks that don’t have any branches. How will banks respond?

What is going to happen to banks and banking in 2020 and beyond? Perhaps the answer lies in the history of banking, and they can make use of the immediate past disruptions to prepare for upheavals in future.

Described below is the evolution of the modern banking system, starting from the first banknote issued by the Bank of England in 1695, all the way to digital banking of the 90s, and rise of the Neobanks, open banking APIs, fintechs and payment apps we have today.

1695 - Bank of England issues first paper banknote - handwritten, with a promise to pay the bearer the sum written.

1855 - Fully printed notes, without requiring any handwritten names or signatures.

Origins of the digital banking system

2010 - Metro Bank becomes the first bank in the UK in over a century to get a banking license.

2019 - Brazilian fintech Nubank crosses 12m digital account customers, who saved 19m hours that would have been lost in queues.

2019 - Facebook proposes Libra as a cryptocurrency, seeking to build a coalition including Paypal, VISA, Payu, Vodafone, Uber and more. Some have since left the coalition.

2019 - Google announces checking accounts, part of a project named Cache, in partnership with Citigroup and the Stanford Federal Credit Union.

What’s next in banking customer experience

The Internet, mobile phones and then smartphones have brought banking full circle - from personalized banking services at bank branches to impersonal service at ATMs, then somewhat personalized online or net banking, and now to hyper-personalized apps in the palm of your hand. Banking institutions are now undertaking branch transformation initiatives to make branches relevant to the customer journey. But the next generation of challenger banks are now more technology companies than financial services providers.

Banks are fighting in unfamiliar territory when they try to transform themselves into technology companies. They should focus on using technology and focus on customer experience rather than making it technology-first banking.

In fact, it’s a good bet that banking services will become more customer-centric - even more seamless than they are now, available across any channel that customers prefer. Customers can open an account online or using a banking app, with eKYC docs and facial recognition making it unnecessary to come to the branch to submit documents or sign a form. Transactions can be done on mobile apps, or even through social networks like Whatsapp payments.

Omnichannel customer engagement and queue management systems allow customers to continue conversations with their banker across channels - from the bank website to email, phone, and then to the branch, and back to the website or email.

The ongoing adoption of cryptocurrency, blockchain banking, and open banking APIs by governments and traditional banks makes it possible that customers in the near future will do nothing but digital banking.

Everything from opening an account to transactions, loans and investment advice is already available with a tap on an app. All of it just has to come together as the bank of the future. In other words, (paraphrasing Ron Shevlin, author of Smarter Bank) the bank customer experience of the future is a “Smart” bank in the palm of your hands.